In the field of biotechnology there are many industrial applications that result in biotech products that we use everyday at home. Some of these are food science applications that utilize enzymes to produce or make improvements in the quality of different foods. In the dairy industry, some enzymes are required for the production of cheeses, yogurt and other dairy products, while others are used in a more specialized fashion to improve texture or flavour.

Isolation and Purification of Enzymes
Enzymes are unstable molecules with a definite physico chemical organization. Even a slight change in this organization reduces the activity of enzyme and sometimes the enzyme is totally inactivated.
Therefore, the enzymes have to be isolated under controlled conditions of pH, ionic strength and temperature. Since they are proteinaceous in nature, standard extraction and purification procedures for enzymes are the same as those used for proteins except that the activity of the enzyme is assayed at each of the following four steps of extraction and purification.
Purification of Enzymes - Enzyme purification involves three steps, electrophoresis. These three techniques described in the following text
1.Dialysis
2.Chromatography.

Immobilization of Enzymes OR Whole Cells
In recent years, the technique of enzyme or whole cell immobilization has revolutionized the prospects of enzyme application in industry. Immobilization is defined as the imprisonment of a biocatalyst in a distinct phase that allows exchange with, but is separated from, bulk phase in which substrate, effector or inhibitor molecules are dispersed and monitored.In other words, an immobilized enzyme is physically entrapped or covalently bonded by chemical means to an inert and usually insoluble matrix, where it can act upon its natural substrate. The matrix is usually a high molecular weight polymer such as polyacrylamide, cellulose, starch, glass, beads, etc.
The common use of crude enzyme preparation in the production of wine, cheese or in tanning to obtain the desired product is known for long time. Their use as catalysts was limited, however, due to their limited availability, instability and the consequent high cost. This limitation has been largely overcome by the immobilization of enzyme on a support, a phenomenon reported for the first time by J.M. Nelson and E.G. Griffin (1916).They reported the adsorption (immobilization) of invertase on charcoal/alumina without loss of activity. However, the technique of enzyme immobilization could be established only after a lapse of about 40 years, when between 1954 and 1961 many researchers developed relevant procedures and the equipments.
Some of the advantages of using immobilized enzyme over free enzyme are as follows:

(i) Because of its binding with a matrix, the immobilized enzyme has better stability in many cases.

(iii) The enzyme can be recovered at the end of the reaction and can be used repeatedly. Further, the processed product is not contaminated with the enzyme.

For example, the reaction can be stopped rapidly by removing the enzyme from the reaction solution. The immobilization of enzyme is performed under mild and controlled conditions, so that the enzymes retain their tertiary and quaternary structures, which are necessary for their activity. Immobilized enzymes are preferred over immobilized cells or tissues, since they have a high specificity and yield pure products.

Techniques for Immobilization
Various methods developed for immobilizing enzymes that are described in this section can be classified into the following five general categories:
(i) adsorption method,
(ii) covalent binding method,
(iii) cross binding method
(iv)entrapping method and
(v) entrapping by microencapsulation.

Improving the enzymes…
'Enzyme stabilization' is one of the most important fields in basic and applied enzymology. In basic enzymology, it is of particular relevance to understand enzyme stabilization principles first elucidating how and why the enzymes lose their biological activity and then deriving structure-stability relationships existing in enzymatic molecules. In applied enzymology, the most significant goal is to achieve useful compounds by biocatalysis. Enzymes are good catalysts in terms of high catalytic and specific activity with ability to function under mild conditions. However, they are not always ideal catalysts for practical applications because they are generally unstable and they inactivate rapidly through several mechanisms. In order to enhance enzyme stability, many strategies have been pursued in recent years.

Textile industry
'Amylases' isolated from bacteria, fungi, pancreas and malt are used in textile industry as softening agents for starched clothes. Starch is often added to cotton fibres as a stiffening agent, before weaving the fibre into cloth.Since, a starched cloth does not take good colour, the cloth is to be destarched before dyeing it. This is done with an amylase preparation, which hydrolyses starch).

Leather industry
Proteolytic enzymes from certain bacteria and fungi are used in the manufacture of leather. These enzymes digest the collagen or connective tissue holding the hairs to the hide in the skin and thus cause dehairing of the skin. These enzymes are also used for softening or plumping of dehaired skin, a process popularly called bating.

Uses of Enzymes in the Food Industry

Meat and beer processing
The proteases 'papain' (from papaya) or 'bromelain'(from pineapple), are used to tenderise meat by hydrolysing peptide bonds. It is also used to stabilise chill proof beer.

'Renin' obtained from the calf stomach is used in the manufacture of cheese, since it converts calcium-casein of the milk to calcium-paracaseinate, which is curd like in appearance. The curd is solidified and processed as cheese after inoculation with an appropriate mixture of micro organisms.
Another enzyme 'catalase' is also used for making cheese, since it breaks down H2O2 produced during cold pasteurization of milk during cheese making process. 'Lipase' is added during the processing of cheese, for flavour production. 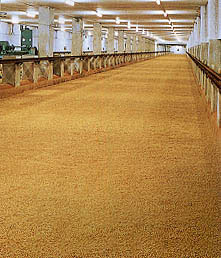 Juice and wine processing
'Pectinases' are often added in canned fruit juices and in wine, since they hydrolyse the pectin making the juice or wine clear.

Chocolate and candies
'Invertase' is used in the manufacture of chocolate covered berries and other such candies.

Soft drinks industry
'Glucose isomerase' is used for the production of fructose and high fructose syrups from hydrolysed maize starch, to be used in soft drinks. 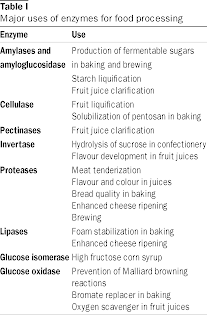 Enzymes for Detergent
For most people, the most popular known application of enzymes is in the manufacture of 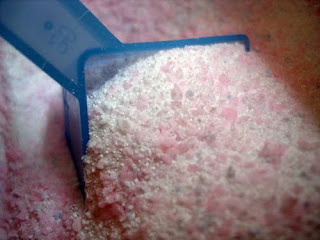 enzymatic washing agents (detergents). Since last 40 years, the use of enzymes in detergents has been the largest of all enzyme applications. Consumers of detergents are actual users of an enzymatic product. In majority of other applications, enzymes are used as auxiliary agents at some point in the manufacturing process and are not, as a rule, present in the finished product - not at any rate in an active form.

Proteases
Proteases are the most widely used enzymes in the detergent industry. They remove protein stains such as grass, blood, egg and human sweat.
These organic stains have a tendency to adhere strongly to textile fibres. The proteins act as glues, preventing the water­borne detergent systems from removing some of the other components of the soiling, such as pigments and street dirt.
The inefficiency of non­enzymatic detergents at removing proteins can result in permanent stains due to oxidation and denaturing caused by bleaching and drying. Blood, for example, will leave a rust­coloured spot unless it is removed before bleaching.
Proteases hydrolyse proteins and break them down into more soluble polypeptides or free amino acids. As a result of the combined effect of surfactants and enzymes, stubborn stains can be removed from fibres.

Lipases
Though enzymes can easily digest protein stains, oily and fatty stains have always been troublesome to remove. The trend towards lower washing temperatures has made the removal of grease spots an even bigger problem. This applies particularly to materials made up of a blend of cotton and polyester. The lipase is capable of removing fatty stains such as fats, butter, salad oil, sauces and the tough stains on collars and cuffs.

Amylases
Amylases are used to remove residues of starch-based foods like potatoes, spaghetti, custards, gravies and chocolate. This type of enzyme can be used in laundry detergents as well as in dishwashing detergents.

Cellulases
The development of detergent enzymes has mainly focused on enzymes capable of removing stains. However, a cellulase enzyme has properties enabling it to modify the structure of cellulose fibre on cotton and cotton blends. When it is added to a detergent, it results into the following effects:
Colour brightening-When garments made of cotton or cotton blends have been washed several times, they tend to get a 'fluffy' look and the colours become duller. This effect is due to the formation of microfibrils that become partly detached from the main fibres. The light falling on the garment is reflected back to a greater extent giving the impression that the colour is duller. These fibrils, however, can be degraded by the cellulase enzyme, restoring a smooth surface to the fibre and restoring the garment to its original colour.
Softening-The enzyme also has a significant softening effect on the fabric, probably due to the removal of the micro fibrils.
Soil removal-Some dirt particles are trapped in the network of micro fibrils and are released when the micro fibrils are removed by the cellulase enzyme.

Biosensors
A biosensor is a sensor that is based on the use of biological material for its sensing function. The biocomponent specially reacts or interacts with the analytic of interest resulting in a detectable chemical or physical change. A biosensor is an analytical device which converts a biological response into an electrical signal. The term ‘biosensor’ is often used to cover sensor devices used in order to determine the concentration of substance and other parameters of biological interest even where they do not utilize a biological system directly. 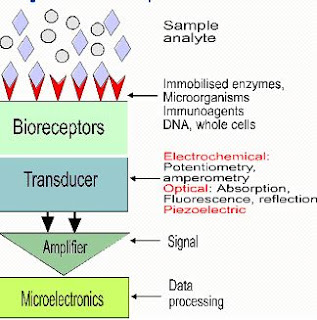 Advantages:
more specific than cell based sensors
faster responds due to shorter diffusion paths (no cell walls)
Disadvantages:
more expensive to produce due to the additional problem of isolating the enzyme
enzymes are often unstable when isolated
many enzymes need cofactors for the detection of substances

Example of a biosensor:
The most widespread biosensor today is the glucose biosensor. It is very often used to measure the glucose concentration in blood. Its application for diabetics’ patients was also the driving force for the glucose sensor research.